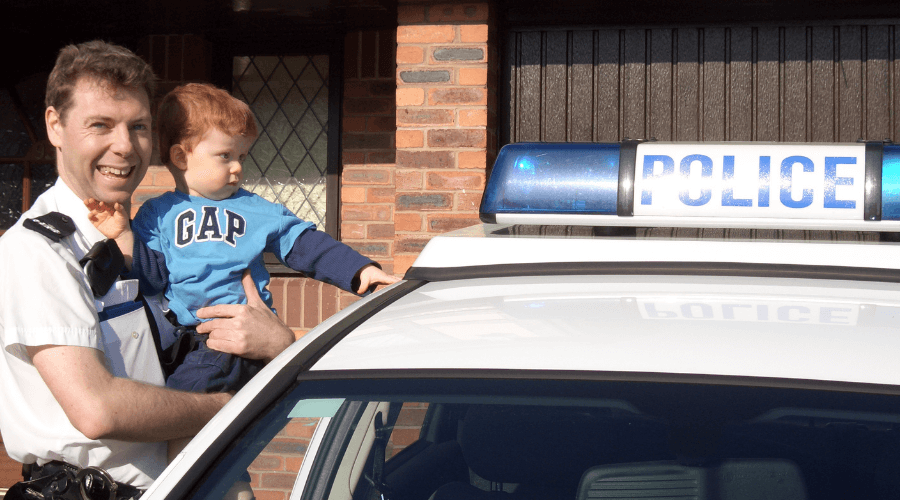 During World Autism Awareness Month 2021, I am sharing my son’s autism diagnosis journey - a story through my eyes as a father back when I knew nothing about autism and why I later founded a neurodiversity employee network at my workplace, TalkTalk.

For the first 12 months everything seemed pretty much normal, each day was a constant cycle of feeds, nappy changes, very little sleep then repeat.

When my son Matthew was around 15 months old, something wasn’t quite right. He wasn't saying any words, he would just make sounds, but these were different sounds to what the other children made.

Around 20 months old, he still wasn't saying any words although his peers at play group were all chatting away. Also, he didn't really play with the other children, he would only play with mum or dad. It became apparent that he saw toys as just objects, which he would line up in patterns or maybe bang together to see what noise they make or if they would break. His behaviour was becoming more challenging too. We didn't understand at the time that our son had sensory difficulties - he was oversensitive to sound, touch, taste and smell so a café or play barn was a very hostile environment.

Autism is a spectrum condition affecting social interaction, communication and imagination. Usually, children are not diagnosed with autism until they are around four or five years old.

When Matthew was around two years old, he was attending speech therapy and at one of these sessions the therapist said to us that he had difficulty with his social communication and imagination. Matthew’s mum used to work in speech therapy, and she knew this phrase was an indication of autism.  Despite this, a formal diagnosis didn’t happen for another 18 months.

Speaking with other parents who have been through a similar experience, I now understand we all have hopes and dreams for our children, however realistic or unrealistic they are. No one wants to hear the news their child has a lifelong condition or a disability. After the shock of the diagnosis began to subside, and navigating our way through the many autism myths, we knew it was time to take action to give Matthew all the help we could.

His mum left her job of 10 years to become his full-time carer and I changed jobs to one with a lower salary but better hours. Also, and with a heavy heart, I decided to leave an institution that had been an integral part of my entire adult life and had moulded me into the person I am today. I left the police force where I had served as a special constable for over twenty years. For me, being a police officer and responding to 999 calls was all part of my identity. It was part of my makeup and giving this up was tough.

We continued our trips out of the house to cafés and play barns, avoiding the busier times and instead choosing the quieter periods. We started to take short breaks to London and holidays to Spain. Matthew loved The London Underground (and still does today!), in fact he was so in awe of it he didn’t seem to notice there were thousands of people all around him.

Slowly Matthew learned to talk and by the time he was four years old and starting school he could say around 50 words. He had started to "echo" the phrases we would say.

Most parents will never have to make the decision to enrol their child into a special school. The stigma attached to the word “special school” is an outdated view but sadly one that persists.

Matthew started at a special school for primary aged children with autism. He needed constant adult support to keep him safe. It was at this school where Matthew was lucky with the best teacher we could have wished for - a lady called Rosemary. She sought to understand the reasons behind Matthew’s challenging behaviours, his very limited diet, his ridged routine and his repetitive and limited language.

Rosemary was so patient, she developed strategies to help Matthew and, along with the headteacher, supported us in getting a formal ADHD diagnosis and the medication that would allow Matthew to focus.

We had made the right decision in choosing special education - the correct setting can make such a positive difference!

Transitioning from special to mainstream education

After completing his primary years within a special education setting, we thought Matthew was ready to transition to a mainstream high school with autism provision. This was not a view shared by many of the education department and healthcare professionals – except for Rosemary!

For any child starting high school, it can be an anxious time for parents and knowing your child will be perceived as different by other children, that anxiety is magnified! But Matthew has had a great five years at high school. His independence and confidence have improved so much.

Next year, Matthew will start college. He loves technology and hopes to work with computers when he is older, so he has enrolled on a BTEC level 1 in IT.

I couldn’t be prouder of him!

Read more about support in the early years.

Mark Naughton is a Senior Business Analyst at TalkTalk, which is a long-standing partner of Ambitious about Autism. He founded, and chairs, the TalkNeurodiversity internal employee network at TalkTalk, which is a network of colleagues who have a personal connection or interest in neurodiversity. He describes it as a place where he would have gone to for support through the challenging years with Matthew’s diagnosis and is proud to be part of an inclusive workforce. 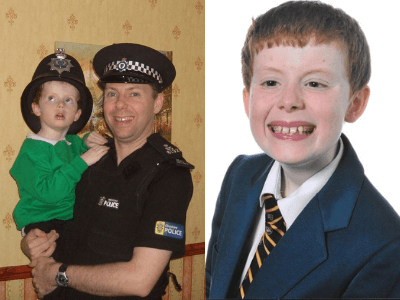 Here are a couple of Mark’s favourite pictures. The first was taken on the last day Mark served as a police officer. It reminds him that the sacrifices we make in life are worthwhile. The second was taken on Matthew’s first day at mainstream school - a day Mark was told would never happen and serves to remind him that he was right to challenge the professionals!