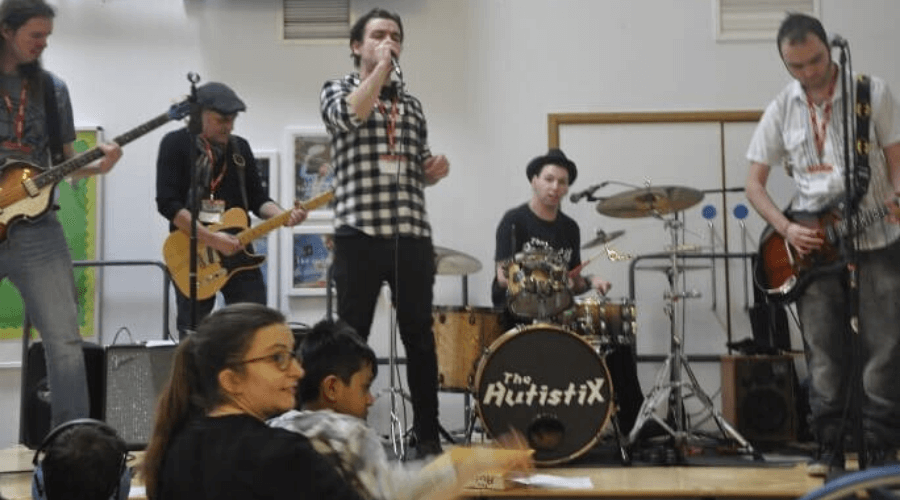 TreeHouse School is a special school in Woodside Avenue for children and young people with complex autism and learning difficulties.

Staff and pupils spent a brilliant afternoon listening to the talented group – which includes drummer Saul Zur-Szpiro - who was one of the first pupils to attend Treehouse School which was set up by a group of pioneering parents in 1997.

The band is managed by Susan Zur-Szpiro, Saul’s mother and a founding parent of TreeHouse School and was a school governor for 10 years. The AutistiX recently performed on the BBC’s One Show, and have also performed with singing legend Sir Tom Jones in the past. The band also perform regularly in mainstream venues, festivals, charity events especially to promote disability and autism causes in schools and colleges.

During their performance at TreeHouse School, they played their own songs and some famous hits that have inspired them including The Beatles and Bruce Springsteen. During the show a current TreeHouse pupil also performed his own written rap on stage along with the band.

Treehouse School’s Head of Music and Drama, Patxi Del Amo, said: “It was an amazing show put on by the band, they had a lot of energy and talent and everyone at the school was buzzing and dancing along to all their songs. It was an honour to have Saul and his parents back with us, this time as alumni and we hope the band’s success continues to soar.”