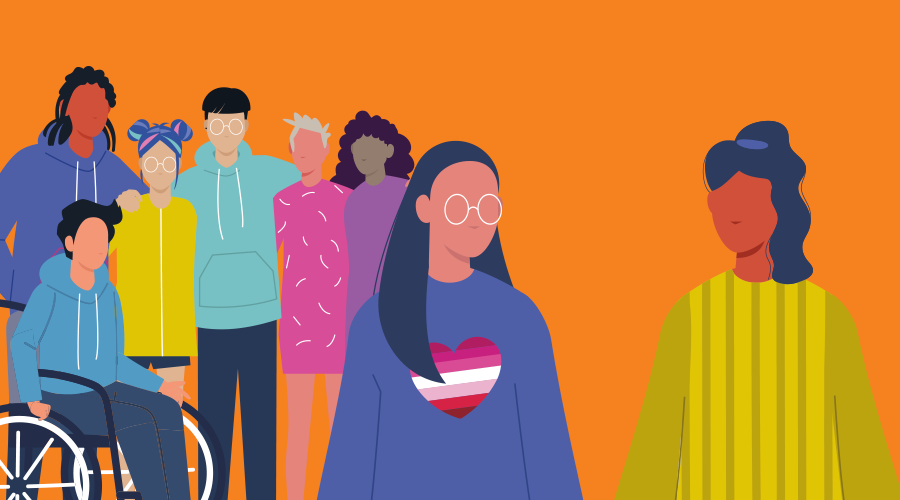 Our autism friendly formats can help children and young people understand different identities. If you prefer information in visual way, here you can read our being lesbian visual story.

The word lesbian originates from the Greek word for the island of Lesbos. In the sixth century BCE Sappho, a Greek poet, wrote poems about her attraction to women.

In 2019, an estimated 2.7% of the UK population aged 16 years and over identified as lesbian, gay or bisexual, an increase from 2.2% in 2018. But some people identify their sexual orientation even younger than 16.

What does being a lesbian mean?

There are lots of autistic young people who are lesbian. This means they self-identify as a woman and find other self-identifying women physically, sexually and, emotionally attractive.

Most people are born with a sexual orientation. Your sexual orientation is not a choice. Like autism, there is no scientific evidence for external factors that causes or influences someone’s sexual orientation. Unfortunately, historically and in some cultures, loving people of the same gender has negative consequences and is taught to be ignored or unlearnt. This is not right. Sexual orientation, for example being a lesbian, is not something that can be changed.

If you’re questioning your sexuality, want to know more about being a lesbian or someone you know has come out to you as a lesbian recently, here are some myths and information you might find useful.

Busting myths about being a lesbian

This is absolutely not true. This idea was promoted in anti-gay propaganda as a scare tactic for people to dislike and hate lesbians. Women who love women, can of course be friends with and enjoy the company of men.

“All lesbians are butch, so feminine women can’t be lesbians.”

This is not true. The term 'butch' is used to describe women who express themselves in traditionally masculine ways. It can be used negatively and cause offensive. However, many lesbian women self-identify as 'butch' or 'tomboys' and enjoy dressing and acting a certain way because it makes them feel good. Other lesbians enjoy dressing in traditionally female ways, and sometimes are referred to as femme. How someone expresses themselves, looks or acts, is not indicative of their sexual identity. There is no one way to look like a lesbian.

“Lesbians want to be men and in a lesbian relationship, one woman acts like a man.”

This comes about from the stereotype that all lesbians are ‘butch’ and because some dress in a way that is traditionally masculine, they want to be men. People choose to dress differently for lots of reasons, for example, they might be more comfortable in certain clothes. This myth is offense. It implies that all couples should follow heterosexual traditions and aspire to be straight men because that is societies standard, but this is not true. No relationships, including LGBTQ+ relationships, should feel the need to conform to societies traditional expectations. How people feel and how they act are individual and unique. In a lesbian relationship, two women are free to act in a way that is authentic to them.

“You can’t have a family if you’re a lesbian.”

Families come in all shapes and sizes. A family could be a long-term relationship or marriage, which has been legal for same-sex couples since 2014. For others, being a family means being a parent. Everyone can be a parent, including same sex couples. There are lots of options for LGBTQ+ couples to be parents, including IVF, surrogacy, fostering or adoption.