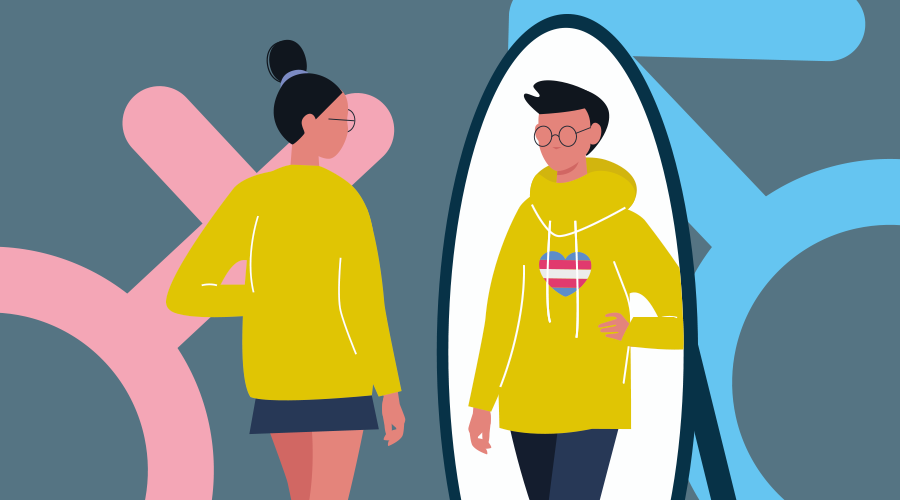 Our autism friendly formats can help children and young people understand different identities. If you prefer information in visual way, here you can read our being trans visual story.

There are a large number of people who are both autistic and trans. In fact, did you know that trans and gender-diverse people are up to six times more likely to be autistic than cis people?

Read Max's blog on transitioning as an autistic young person.

What does being trans mean?

Trans is short for transgender. Being trans means identifying as a gender that's different to what you were assigned at birth. Some people identify as "trans" and others prefer "transgender", it's important to only use the term that they feel most comfortable with.

Everyone is assigned a biological sex at birth, male, female or even intersex. People are then treated as this gender and are expected to experience the world as an assigned male or female. For trans people, their biological sex does not represent who they authentically are and how they feel. This can be called gender dysphoria. When trans people express themselves in the gender they feel authentic to them, this can be called gender euphoria. Being trans is not a choice.

When people feel differently to their assigned biological sex, people may make changes to their life or lifestyle to represent their authentic selves. They may start dressing differently or asked to be called another name. Some people begin taking hormone therapy. Most importantly, the steps taken, big or small, are up to the individual and taken when it feels right for them.

Gender variance has been historically referenced to since the ancient times. In Europe, historians say that in the year 222, Roman emperor, Elagabalus preferred to be called a lady (rather than a lord) and sought sex reassignment surgery. By some, they are seen as an early western trans figure.

Busting myths about being trans

“There are only two genders.”

Like autism, gender is a spectrum. Gender isn’t binary, or just male and female. Being trans doesn’t mean someone is confused about their gender identity or following a new trend – trans identities have been recognised for a long time by cultures and societies around the world. Historically, cultures all over the world recognise what they would call a “third gender” or “gender-fluid” identities whilst in modern society countries such as Germany, Australia, Nepal and Pakistan even offer a third gender option on official forms. Being trans can also include identifying as non-binary or agender which is when a person doesn’t feel any gender at all.

“They’ve changed their gender, I feel like I’ve lost them.”

When someone tells you their authentic gender, they have not changed who they are as a person. There is no need to grieve, be in mourning or feel as though someone has died. When someone comes out to you as trans, they likely just want to be seen as their authentic selves. When someone finds it hard to understand and accept this, they might find it difficult. But it’s important to remember, the person coming out to you has found it a thousand times more difficult.

“Being trans means, someone is non-binary and uses they/them pronouns.”

“Remembering pronouns is too difficult”

This is insensitive and unfair. Most people have pronouns that they use, they are not preferred pronouns, they are obligatory, and it is important you make the effort to use the correct ones when talking to someone. Trans people might use binary pronouns like she/her and he/him or even non-binary pronouns like they/them. If you get it wrong, don’t worry, we all make mistakes sometimes. Just correct yourself and apologise. For example, you might say “I’m sorry, I meant [correct name/pronoun]”. A quick correction validates that it was a verbal misstep and not a deeper level of invalidating the person’s identity.

People identify as trans at different points in their life but only they can choose when and how they define their identity or come out.