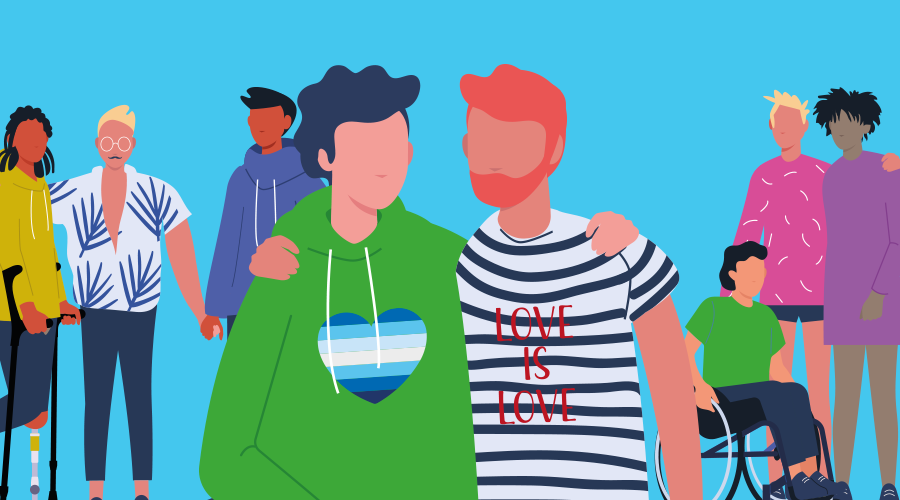 Our autism friendly formats can help children and young people understand different identities. If you prefer information in a visual way, here you can read our being gay visual story.

The word homosexual originates from both Greek and Latin. The Greek “homos” meaning same and Latin “sexual” referring to sexual acts and affections between members of the same sex.

In 2019, an estimated 2.7% of the UK population aged 16 years and over identified as lesbian, gay or bisexual (LGB), an increase from 2.2% from the year before. Though some people feel confident in their sexuality even younger than 16, whilst others are still questioning.

What does being gay mean?

Being gay traditionally means being a man who finds other men attractive. This is male homosexuality. But sometimes women who find the same sex attractive also use this term interchangeably with lesbian. According to National Statistics, being gay and lesbian are the largest group under the LGBT umbrella.

Like many others, some young people with autism, self-identify as being gay. Being gay is not a choice. Like autism, there is no scientific evidence for external factors influencing children and young people to be a particular sexual orientation. Unfortunately, historically and in some cultures, loving people of the same gender has negative consequences and is taught to be ignored or unlearnt. This is not right. Sexual orientation, for example being gay, is not something that can be changed.

Busting myths about being gay

“Being gay is unnatural.”

This is hateful and wrong. There is nothing unnatural about diversity across humanity. Sometimes this opinion is rooted in cultural or perhaps religious opinion and is claimed to be taught within religious texts. However, most progressive groups accept that love is love and it looks different for everyone. Some religious groups have even found evidence in religious texts for supporting same-sex relationships.

“You can’t have a family if you’re gay.”

Families come in all shapes and sizes. A family could be a long-term relationship or marriage, which has been legal for same-sex couples since 2014. For others, being a family means being a parent. Everyone can be a parent, including same sex couples. There are lots of options for LGBTQ+ couples to be parents, including IVF, surrogacy, fostering or adoption.

“Being gay can be cured. This makes gay men more masculine.”

This is offensive and inappropriate. No one should be told their identity is something that is wrong. Conversion therapy is any form of treatment that aims to change a person’s sexual orientation or gender identity. It is based on the concept that being gay or LGBTQ+ is an illness and can be cured. This is not true and conversion therapies are unethical and harmful. Politicians are campaigning to ban conversion therapy.

This comes about from the stereotype that all gay men act feminine. People choose to act and dress differently for lots of reasons, for example, they might be more comfortable in certain clothes. This myth is offensive. It implies that all men should have masculine traits, this is also known as toxic masculinity.

“Gay people will get HIV and die from AIDS.”

Sexual health is important for everyone. Anyone can get HIV but people from some groups or parts of the world are more likely to be affected. In particular, men who have sex with men and black African people are disproportionately affected.

You and your partner/s should be getting tested regularly and use protection if possible. There is a medication called PrEP which prevents people who engage in casual sex from contracting HIV. For those that do contract the virus, there are medicines that enable them to live a long and healthy life to a point where the virus is undetectable, this means it can’t be passed on to someone else.